I’ve been back working with the SAMD20 microcontroller family again for an RS485 network project. While writing code for the device I noticed that it would crash quite often. Further investigations revealed that sections of the code were not being written to flash memory. This device has a 64 byte flash page size and it will only accept writes of 64 byte blocks. If you try to write a smaller amount the write is ignored. This causes a problem when you want to write a flash image that is not an integer multiple of 64 bytes in size – the last few bytes will not be written out. The version of openocd I’m using came from here https://sourceforge.net/p/openocd/code/ci/master/tree/ . I reported the issue but while I’m waiting for a response I’ve managed to workaround the problem by adding some padding to the flash image in the linker file as shown here.

This linker script is for the SAMD20E17 MCU. The value chose for the padding data is important as the erased state of flash is logic ‘1’. By using 0xffffffff as a padding value (which may or may not be written to the flash) read-back verification will report a success. 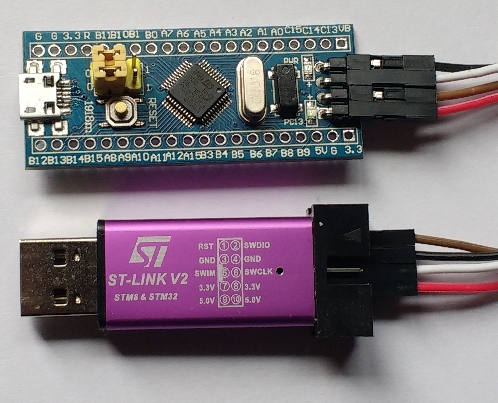 This development kit is based around the stm32f103C8T6MCU. This is a 72MHz Cortex M3 device with 64kB of flash memory and 20kB of RAM. The debugger is an ST-Link V2 clone which can be used to debug STM32 and STM8 devices. I used this with OpenOCD and needed to edit/creaqte the configuration files stm32f103_aliexpress.cfg and stm32f1x_64k.cfg (see below for contents of these files). Note: the register that tells OpenOCD the size of system flash incorrectly indicates 128kB so a value of 64kB is forced in the configuration file. The first test program was blinky of course but this time I decided NOT to write the device header file myself but instead make use of ST Microelectronics
System View Description file (SVD file) for this device. This can be downloaded from here: http://www.st.com/resource/en/svd/stm32f1_svd.zip. Contained in the zip file is STM32F103.svd : an XML description of the peripheral registers within the STM32F103. A separate utility called SVDConv.exe was used to convert this “svd” file to a header file suitable for use with GCC. The SVDConv utility was found in Keil’s ARM MDK (http://www2.keil.com/mdk5/). I’m working in Linux so the conversion command was:

This produced the header file STM32F103.h. The header uses structure definitions and pointers to structures to access peripherals and the registers within them. It also has a couple of dependencies include/core_cm3.h and include/system_ARMCM3.h. I started down the road of finding these only to realise that these too had further dependencies. Furthermore, they served to hide a lot of the startup code, interrupt vectors and so on that I like to keep an eye on. So, there are two choices: either remove the #include statements for the dependencies or create empty files with those names. I did the latter as it left the STM32F103.h file unchanged. An additional header file of my own (cortexm3.h) is needed to fix up a couple of missing symbols which are defined as shown below (other symbols are also defined):

These symbols refer to Input/Output datatypes which should probably always be volatile – in short it works.
As an experiment, I tried using STM32Cube to generate code for a simple blinky project. First of all, I should say that it worked (more or less – I had to manually edit the output Makefile to point to the directory where arm-none-eabi-gcc was installed). This is probably a great tool for a company that is producing a range of products across different members of the ARM-Cortex family. From a teaching and learning perspective though the generated code is of limited use. It is littered with conditional compiles, helper functions that hide important details, and requires you place your code between various sets of comments. The generated code is also MUCH larger than the version below. In short it obscures the lower levels of the microcontroller that I’m interested in teaching. The approach I’ve taken here is to use the device’s SVD file for the peripherals and my own, simpler, device specific Cortex M3 cpu core file. I also used my own simplified initialization code to show exactly what goes on after reset.

This is built with a script file (or batch file) that executes the following commands:

The second line of this is not necessary strictly speaking. I use the same script for mbed boards and the “bin” output format is useful there.

I tried to write out all of the steps in this but decided that a video would be much better. Its over here:

A number of other examples are to be found over here https://github.com/fduignan/stm32f103c8t6. These include Systick (at default 8MHz) speed, Systick at 72MHz and UART input/output.